In the graph we have simple nodes, containing the messages fired by the chatbot and functional nodes. As per name, functional nodes contain functions, that is to say nodes containing some logic. With functions you can set built-in logic rules or execute API calls to your core systems and associate a chatbot behaviour according to every function’s output.

In order to create a functional node select the 🔹 icon from the controls toolbar at the left of the board and exactly as per simple nodes, click in any empty space in the board.

Every function has outputs represented through red edges. In a functional node, edges are predefined, therefore, when creating new ones the edge control panel will display a drop-down with the available options. For example, in the function below, we check an email address and are given valid and invalid outputs as options.

Most of the Standard Functions are validation functions. As an example, the simplest scenario is a function with two outputs: valid and not valid. When the input from the user is not valid, you can create an out-coming edge pointing to an error message. When the input is valid, the conversation can continue as per the “golden path” to the following conversational node.

Some of the Standard Function examples include:

The is_date_in_range function has 3 arguments:

Max date and Min date can be empty: the function simply won't validate the missing border. In the following example, the conversation will display to the user the message "In range" if and only if the date picked up is between the 1st and the 10th of January 2022.

⚠️Important note: It's a good practice implementing the right input validation from both the angles, the UI and the logic. In the example above, the calendar edge can be customised the two limit dates Max Date and Min Date. 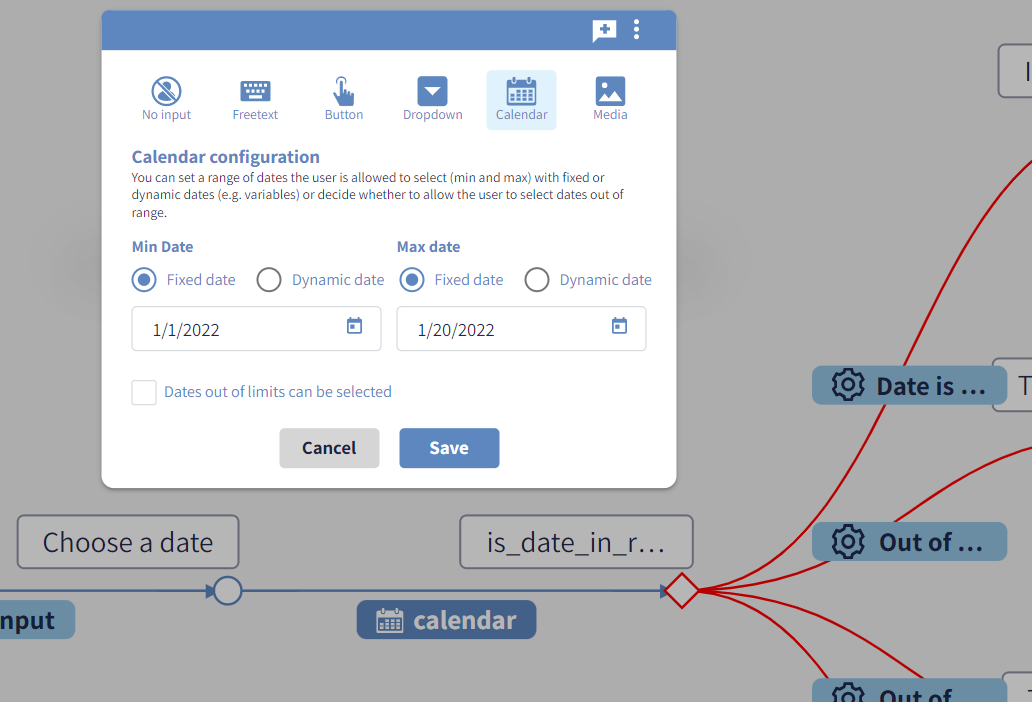 This customisation allows users to proceed with the conversation if and only if they pick-up a date between the 1st and the 10th of January 2022. However, it's worthy increasing the robustness of the process by concatenating the is_date_in_range function.

In particular, by selecting the checkbox Dates out of limits can be selected, the dates out of the range will be clickable: this is useful to give to the user an explanation of the date limits. For example, in a claim notification process the date of the loss can't be in the future: the conversation designer may:

⚠️Important note: It's a good practice implementing the right input validation from both the angles, the UI and the logic. In the example above, the freetext edge can be customised with the Email input type. 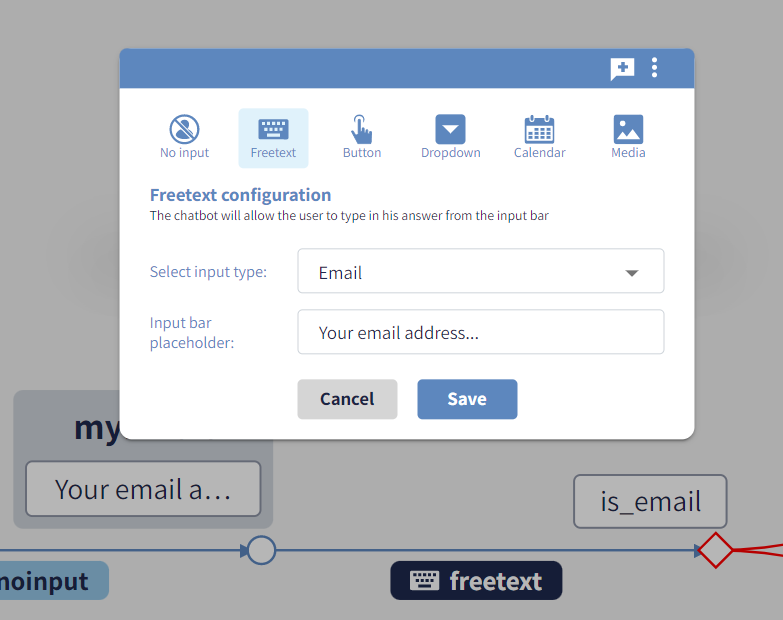 This customisation allows users to proceed with the conversation if and only if they type a valid email address. However, it's worthy increasing the robustness of the process by concatenating the is_email function.

The function is_equal, verify if two variables are equal. As outputs we have valid and not valid. This function takes 4 arguments:

In the following example, the is_equal function is used to check if the date picked up by the user is today or not. In the first case, the process will display the message "Selected today", otherwise it will display "Selected a day different from today".

The function is_null, checks if a variable is empty (not defined, defined as null or defined as an empty string). As outputs we have valid and not valid.

With Custom Functions you can define a new function along with its outputs. Spixii CPA provides a powerful Function Manager to create and manage the function straight from the platform.

When creating a new functional node, the option Create new function is available from the sidebar. When clicking the button, the function control panel will allow you to specify name and description for the new function.